The Faulty Premise of the film "God's Not Dead" 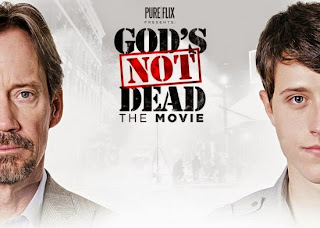 It has been ages since I posted on my blog. Life and lack of a personal computer were the biggest hindrance. I miss blogging, though. I've missed out on so many worthy news items and movies to write about. Hopefully, I can fall back into a regular writing routine, since I have now achieved "stability" in that I have moved into a home of my own in July. No more dealing with roommates with questionable personal values or overbearing resident landlady who only wanted the extra income a renter brought in, but not actually liking that someone is in her home. I can definitely understand that, being somewhat "territorial" myself. But when you live with people or allow people to live in your space, some accommodation is required. You can't be dictatorial. Or you can, if you want to drive people away.

Anyhow, this post is about a movie I saw last Saturday, called "God's Not Dead". I knew before deciding to rent it that it was an evangelical Christian film, but curiosity got the better of me because the premise was intriguing, if not outright ridiculous. The movie is about an evangelical Christian college freshman who has to take a philosophy course as part of the liberal arts requirement for his pre-law degree. On the first day of class, his philosophy professor announces to the class that in order to study philosophy, all the students have to accept the Nietzschean premise that "God is dead". He did not want anyone to argue from the standpoint that the supernatural is real. In fact, on his chalkboard is a list of philosophers like Ayn Rand, Nietzsche, Sigmund Freud, Stephen Hawking, Richard Dawkins and others. He asks the class what they all have in common. Since I took a political philosophy class in college, I knew from the missing notables like Socrates, Plato, Aquinas, and others that his list of philosophers were likely all atheists (though Sigmund Freud was Jewish). Sure enough, that's exactly what the professor indicated to his class. In an outrageous scene that screamed incredulity, he required for the first graded assignment that all of his students write on a piece of paper: "God is dead" and sign their names and pass it to him. All of the students do so without hesitation...except for the lone evangelical Christian student, who views doing this as a sign of betrayal to the God he worships. So, he refuses, much to the professor's surprise.

The professor then offers an alternative, which is to allow 20 minutes of three classes (one per week) for the evangelical student to argue his belief that God is not dead, in front of the entire class. The student and professor negotiate who will judge if he made his case. The professor wanted to be the final judge, but the student won the argument when he said that the professor wouldn't be able to be objective. So, the verdict would be rendered by the rest of the class.

This assignment creates problems for the student's relationship with his controlling girlfriend, who has planned their entire college career and graduate school career for the both of them. From her perspective, he can't win an argument against a university professor and doing so will harm his grade and jeopardize their law school plans. However, he views this opportunity as a chance to prove his worth to God. A pastor of a church (one of the minor characters with a subplot) quotes a Bible verse to the student about how denying God will mean that God will deny you in the afterlife. The take home message of the film is supposed to be that God requires Christians to defend God. However, from a logical perspective, why would an all-knowing, all-powerful creator of the entire universe require an imperfect human being to "defend" God from the beliefs / statements of another imperfect human being? This is one of the "flaws" of religion, as it is seen as a license to proselytize and judge others who disagree.

As the film progresses, we see that the professor is not just an atheist, but a classic textbook example of a narcissist. He makes a personal threat to the evangelical student in the hallway after class that making him look bad in front of the class will have repercussions in regards to his law school dreams. He belittles his wife in front of dinner party guests. He is truly made out to be a monster and as we later learn, he became an atheist when he was 12 years old and pleaded with God to spare his cancer-stricken mother from death. When that didn't happen, he turned his back on God and as the student was able to eventually coax out of him, it's not so much that he doesn't believe God exists as he hates God for not saving his mother from cancer. This is a fallacy that many evangelical Christians seem to believe. I have talked to many atheists and known many over the years and from my understanding, people who are atheists are very smart individuals and have a strictly rational / scientific mind. They require absolute evidence that anything supernatural exists before they will believe anything. There's nothing wrong with that. It's just the way they are wired. Of course, many of the atheists I've known did grow up in fundamentalist / conservative evangelical or authoritarian religions. It's like they swung in the opposite extreme, possibly owing their insistence on scientific-backed evidence to protect them from the outrageous claims made by many religions (for example, in Mormon theology, the idea that the founder, Joseph Smith, discovered golden plates written by an ancient peoples about the real history of the Americas, in which the actual golden plates are not with us to prove Smith's claims). In other words, most atheists don't hate God because they simply do not believe that God exists. To say that atheists hate God is the equivalent of saying that a person hates the flying spaghetti monster. It's a ridiculous claim. Yet, that is what this film tries to convey.

Some other characters in the film are there to reinforce the evangelical Christian view of the world that the point of existence is to accept Jesus as a personal Lord and Savior or else end up in hell for all eternity. They have a young Muslim woman who keeps a secret from her family that she actually got baptized as a Christian (according to Islam, converting away from that religion can result in authorized death being imposed by believers). There's also a Chinese exchange student who grew up in an atheist country but was so taken by the evangelical Christian student's arguments against their atheist professor that he wholeheartedly decides to become a Christian, too, much to his father's (back in China) baffling dismay. Dean Cain plays an alpha male businessman who is all image and materialism and when he learns on an important anniversary dinner that his girlfriend was diagnosed with cancer, he complains about her timing and dumps her. At the urging of his Christian sister, he visits their mother who is suffering from dementia and asks her why she, in all her kindness, was afflicted with that disease, while he was a jerk to everyone and enjoyed a good life. In a moment of coherence, surprising him, his mother replies that Satan sometimes allows people to experience the good life so that they will never turn to God. Yowsa! There's also a cameo by one of the Duck Dynasty guys, promoting church / conservative Christian evangelicalism. Ug.

The characters have surprising interconnection, which you will discover as you watch the film (if you care to watch the film). Eventually, it culminates in a Newsboys concert. One of the atheist characters has what is known as a "death bed conversation" which is ridiculous propaganda and reinforces the evangelical Christian message of the film.

It amazes me that evangelical Christians believe that atheist university professors are a problem that evangelical students need to be made aware of. From what I know about university professors, I don't think any philosophy professor would impose his or beliefs on students. They wouldn't promote atheism in their classes. It's an evangelical Christian delusion to assume that just because questions get asked in Philosophy class that Biblical literalists can't explain or answer to satisfaction, doesn't mean that atheism is being promoted or required of students.

However, if I was in a class where a professor made a demand that one either turn in a paper stating that "God is dead" or else lecture to the class trying to prove the existence of God, I would take that challenge. However, my reasons for why I believe God exists is far different answer than what evangelical Christians come up with. For me, it is through near death experiences, synchronistic experiences, and universal ideas that all religions / spiritual beliefs share, that point to the reality that we live in a spiritually directed universe.

What I liked about the film were the acting, the music, and a couple of ideas. For one, the professor is a classic example of "narcissistic personality disorder". For another, a pastor told a woman who was in love with an atheist that she had "Cinderella Syndrome"...in which her attraction to a man simply because of his physical attractiveness even though they had little in common had more to do with her need to feel validated. Apparently, it is very validating for a person when someone really attractive falls in love with you.

The film was interesting to watch and once again be reminded how much my views have evolved far away from the evangelical Christian view that I was "brainwashed" with as a teenager through a military base's youth program. I'm glad that my personal views are more universal in scope and that the God I honor and recognize is intelligent and powerful enough not to need imperfect humans to "defend God's honor" against the ignorance of other imperfect humans. My personal spiritual view is that the ultimate meaning of existence in human form is "to know thyself." Interesting, in the film, the atheist philosophy professor quotes that very line "to know thyself" to his wife during his dinner party. That comes from Socrates and Plato. It is the sign at the oracle at Delphi. Interesting that this movie would have a God hating atheist quote a spiritual concept as what Socrates believed: that we are spiritual beings having a sojourn on earth and the ultimate goal is to learn all about ourselves and what we are capable of. I love good and unintentional irony like that!
Posted by Sansego at 11:19 AM 1 comment: