The McDonald's Woman Who Claimed "I Won!" 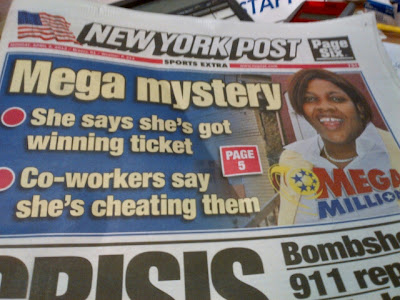 Last week's record MegaMillions drawing (over $600 million jackpot) had three winners in different states: Maryland, Kansas, and Indiana. No one has come forward, except for a lady in Maryland who works at McDonald's. The basic info on her is that she is a Haitian immigrant with seven children. She claimed to have bought a separate lottery ticket for herself, even though she was part of a lottery pool at work and bought tickets for that.

When I heard that story, I was automatically suspicious. The media reported it but she did not show anyone a ticket with the winning numbers on it. Also, why would she go to the media before going to a lawyer / financial advisor or the lottery headquarters to collect her winnings?

If her claim is true, it makes her look like a greedy, selfish bitch. If she is part of a lottery pool and tried to stiff her companions, does she not realize the bad karma of that action? Not just that, but there was an incident in Georgia several years ago where a pool of taxi drivers won a multi-million dollar lottery. One of the members of the pool had paid into it for years. When he did not pay the group for lottery numbers one time, it happened to be the time that the lottery pool won. The pool said that he should not get a portion of the earnings since he did not pay them in advance that time. He claimed that he should be included because he had paid on a regular basis for years. The result was that it went into litigation and was tied up by lawyers. I don't remember reading whatever happened in that story, but it is never a good thing when you have to get lawyers involved. All you are doing is throwing money at lawyers, who don't care either way what happens, so long as they get as much money as possible.

It's sad to see what greed brings out in people. We see it every year on the day after Thanksgiving when normally civilized beings become rabid consumers storming shopping centers in the wee hours of morning for the shopping deals. It doesn't matter who they hurt to get to the merchandise of their greedy desires.

That's what I see with this McDonald's employee, if her story is true. If she's part of a pool, too bad. She'll have to split the money. There is no way she can prove that she bought a separate ticket if she collected money from everyone and bought tickets.

However, her story doesn't add up because she has changed the details a few times and in interviews, she does not express emotions that are consistent with how a "normal" person might act. For example, in the past week, she said that she hid the winning ticket in McDonald's. Seriously. Why would she do that? When she went to McDonald's to look for the ticket, she claimed that the manager would not allow her to enter the restaurant. Gee, I wonder why? Now, she's saying that she lost her ticket, but wouldn't let her daughter look for it in the house. I saw the video where she claimed to have lost the ticket. She states it "matter of factly". There is no trace of emotion in her voice. You would think that a woman who has seven children and works in a low wage job like McDonald's would get upset about losing a winning lottery ticket! Instead, her response was more serene and Buddha-like. An "oh well" kind of non-attachment. I find that hard to believe. Instead, logic dictates that she likely never had the winning lottery numbers and only created this "drama" to get attention for herself. When she received too much attention and too many questions, she was unable to answer them so she saw the only way out of the situation she created for herself is to say that she lost the ticket rather than admit to lying.

If I was a manager at the McDonald's where she worked, I'd fire her. Not only has she proven herself to be untrustworthy and a likely liar, she also created unnecessary drama at work among her co-workers. How could she return to work knowing the trouble she stirred by her incredible story? I imagine that everyone in her lottery pool would be quite angry with her and never trust her again.

Greed does strange things to people. This is a case example. The media also failed when they chose to run with this story without proof that she won. This should be a lesson for them. Anyone can claim to be a winner, but before the media reports on the story (no matter how sensational it might be), they should ask to see the winning ticket first. This seems to be basic Reporting 101 stuff. Does the media not verify facts any more? It is vital to establish a person's credibility. Otherwise, we end up with attention-seeking narcissists who just want fame by any means necessary.

This woman wants attention. I say we give it to her. Is she in the country legally? INS should look into it before she collects unemployment insurance or welfare. I have a feeling that her nightmare is only just beginning. She is nothing more than a modern retelling of the old story about the boy who cried wolf. Instead, it's the woman who claimed "I won the lottery!"
Posted by Sansego at 10:22 PM