The True Spirit of Christmas 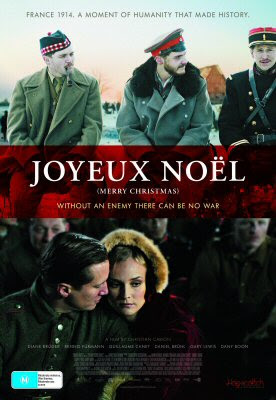 On Christmas day, in the evening, I watched the French film Joyeux Noel that I had been wanting to see for a couple years. Even though I heard good things about it, my hesitation about seeing it was that I'm not fond of war movies, especially during the Christmas season. It really does take a lot for me to "get in the mood" to watch a war movie. Since this one is about a situation that occurred during World War I, I was even more hesitant to watch it. I hate World War I. It's one of the least interesting wars for me, because I think it was completely moronic, unnecessary, and an incredible waste.

In a political science course in college, I had to read the excellent "Why Nations Go to War" and there was a chapter on World War I. Basically, the war was completely preventable. It was the result of the alliance system and faulty communication. If I'm not mistaken, the sheer stupidity of World War I was one of the examples that Kennedy used in his unwillingness to start a war against Cuba during the Missile Crisis of 1962. I'm glad that we had a president who learned something valuable from history, for we might not be here today if the USA and the Soviet Union had gone to nuclear war over the situation in Cuba.

But, despite the festive occasion and the need to feel positive about the holiday, I forced myself to watch the film and endure the opening scenes of war. Once past that, I found myself more interested in the story and liked the movie more and more.

Joyeux Noel is about the known situation where, on Christmas Eve and day in 1914, soldiers on both sides of the trenches called for a truce and "fraternized" with one another in the spirit of goodwill. The film shows the perspective from the Germans, the French, and the Scots and what I most love about this film is that it is probably the first "tri-lingual" film I've ever seen. We get equal dialogue in German, French, and English and I absolutely LOVE it!

The way the truce begins is that the group of Scots decide to honour the holiday by requesting to their bagpipe player a performance of a favourite holiday song. Since the trenches were in close proximity (with the deadly "no man's land" separating the opposing trenches), the Germans and the French could also hear the bagpipe. Not to be outdone, the Germans sing a Christmas carol and even put out Christmas trees for all to see along their trenches. Germans are big about Christmas trees (having lived in Germany as a teenager, I can attest to this tradition). Not even the roughness of trench warfare will cause Germans to forgo their sacred "tannenbaum."

Officers of the three nationalities soon meet in no man's land to toast one another and open a dialogue, which encourages the rest of their men to climb out of the trenches and meet in the middle to exchange greetings and show one another photographs of loved ones back home. Despite the language barriers, the men see one another as having the same feelings: missing loved ones back home and hating to be on the front, and even scared of being killed. There's even an argument over a cat that constantly walks back and forth from one side to another. The Germans named it Felix, but the French soldier claims that it goes by a different name.

The chaplain for the Scots gives a multinational Christmas Eve mass, which gets him in trouble later with the bishop, who delivered a nationalistic sermon of his own about the evilness of the Germans and telling the Scots soldiers that God wants them to kill "the krauts" for the betterment of the planet. Yikes! Sounds a lot like Pat Robertson.

On Christmas day, all sides agree on the importance of burying their dead and offering last rites. It was a multinational effort. Afterwards, they played soccer, talked with one another, and continued the festivities as though they weren't at war. It was truly amazing to see.

Of course, their respective governments saw this as an act of treason. For obvious reasons, nations at war depend upon obedient soldiers to kill the enemy without question. It's much harder to kill someone when you know them, met them, or know personal details. It's the reason why to this day, giving enemies demeaning nicknames ("gook", "hajji", "raghead", "kraut", "jap") is part of that psychological process of thinking of the enemy as less than human.

All of this illustrates why war is an incredibly stupid thing that I hope humanity will one day outgrow. I'm all in favour of banning warfare in favour of bringing back "dueling." Can you imagine all the lives and expense saved if we had just put Bush and Saddam in a room with a pistol each, letting the man with the quickest draw win? Of course, the political elite would never allow that because they are cowards and prefer to use pawns for cannon fodder.

That many men in the trenches saw the humanity in the enemy on Christmas eve shows how ludicrous World War I was. Today, Europe is unified and it's hard to believe that Germans once shot at the French and British in two world wars. Now, all Europeans care more about quality of life issues and visiting one another's historical sites. It's a true elevation of humanity at its best.

Can that happen in other parts of the world? Well...there is a difference between European countries quarreling and a "clash of civilizations" that is going on right now. It would be too hard for Americans to ever leave the comforts of the Green Zone in Baghdad to join in fellowship with Iraqis, some of whom may be terrorists who don't care enough about their own lives so why trust them with ours? Besides, with the differences in culture and religions, there is no unifying holy day between Christians, Jews, and Muslims that would inspire the same kind of "Christmas Day truce" between the warring parties.

When the film ended, I was surprised by how good it was. For a movie about war, it actually had a hopeful message and was easily watchable on a sacred day like Christmas. I highly recommend this one for your viewing. Its just one more reminder of who I am at my core. All through my life, since elementary school, I've always sought out foreigners for friendship and I truly believe that I'd be most happy in a career where I had working contact with foreigners on a daily basis. I love the challenges of trying to communicate through our different languages and finding common ground in some surprising things. If anything, this film shows the overall decency of the men who are asked to fight in war while the leaders who wage wars are the inhumane monsters to be disobeyed. 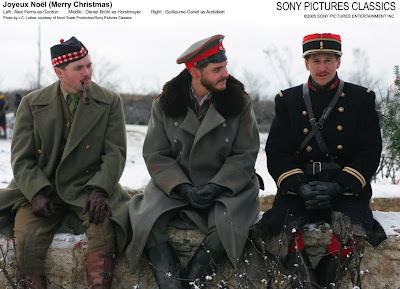