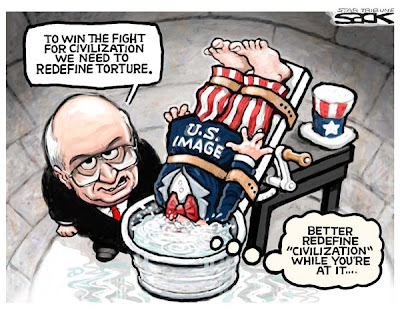 On Monday, the most evil man on the planet (Dick Cheney) finally confessed to being directly involved in authorizing the use of torture on people captured in the "War on Terror." In a scene ripped out of A Few Good Men, he finally pulls a Nathan Jessup (excellently played by Jack Nicholson in full psychopathic glory). It was like: "Did you order the waterboarding?" And without blinking an eye, Cheney doesn't mince words. "You Goddamn right I did!" Yup, yup! That's your evangelical Christian for you (the only group of people he remains popular among).

Well, I move that we vote to impeach the evil bastard, try him on war crimes, convict him, and then administer the only suitable punishment for treason. You're smart enough to know what that might be.

A Christian response? Okay...it's not. I admit it. But is there a more evil person on the planet? I can't think of a single person who comes close. Think about it!

With someone like Saddam Hussein...there was no question the guy was evil. He didn't hide his true nature. Everyone knew he had people killed. He took a sadistic pleasure in torture and killing. Even most Iraqis knew Saddam was a bad guy. No one mistook Saddam for a good guy, not even our CIA, which helped to finance and arm most of his career when he was fighting the Iranians in the 1980s. He was our baddie. So, if everyone knows a person is evil, what's so sinister about it?

I think what's worse than that is a person who pretends to be good while behind the scenes is a master manipulator and a devient scoundrel who indulges in evil, sadistic pleasures. So, between two types of evil: the in-your-face-evil versus the behind-the-curtain-evil-who-pretends-to-be-a-Christian and actually fools people into believing the image over the reality, which evil is worse? That's the sign of the anti-Christ, isn't it? I've heard many Christians say that the anti-Christ would fool the most sincere Christians. Who has done that besides Bush and Cheney?!? HELLO!

I don't believe Bush is evil, though. I just think he's an idiot with a runaway ego. He's incompetent but doesn't know it. Cheney played him like a fool all these years. Cheney's the real deal. He's evil to the core. To me, he's so transparent in his evil that his sneer gives him away. Just watch the movie Devil's Advocate, when Charlize Theron goes crazy seeing beautiful people with a demonic sneer. That's what Dick Cheney is...a snarling demon beneath the human flesh. There is no goodness left in him. Even an old friend, Brent Scowcroft (sp?), said a few years ago that he no longer recognizes his friend and colleague from the first Bush administration. Cheney changed between 1991 and 2001. I think he changed in 1997, when he became head of Halliburton and schemed for a way to get back into power.

Cheney doesn't want Obama to close Guantanamo Bay. He wants it to continue until the "War on Terror" is over. Hello! The War on Terror is designed to never be over. It's a never ending war concocted in a neo-conservative think tank after the collapse of communism left them without an external threat to scare the American people into voting against their own economic self-interests. Terrorism is real...but take it from a guy who lived in Europe during the mid-1980s when terrorism was rampant. Europeans did well treating it as any crime...a police issue, not a military one. If terrorists "hate our freedoms", why aren't they attacking Sweden or New Zealand? There is a direct correlation between nations that are involved in undermining foreign governments and terrorist reprisals. Cause and effect. Everything in this world has a cause and effect. Blaming terrorist reprisals on liberals, peaceniks, feminists, and homosexuals is baffling, but Pat Robertson does so and his blindly loyal followers believe him because they know nothing about cause and effect.

Strip away the curtain and we'll see that we have been manipulated by one person and one person only: Dick Cheney. He is the evil man behind the curtain. No other person alive on earth today deserves eternity in hell more than Dick Cheney. He is evil to the core of his being. Someday, when his soul gets a life review, he will experience the waterboarding of every person he pushed our government to do. His life is worth looking at to find that one point when he switched. When the light of spirituality turned dark forever. It was probably the moment he sold his soul to Satan. If you're still not convinced...get some discernment and watch him speak. Look at him. The man pulsates with evil. He is the kind of person who never should have been trusted with any kind of power. 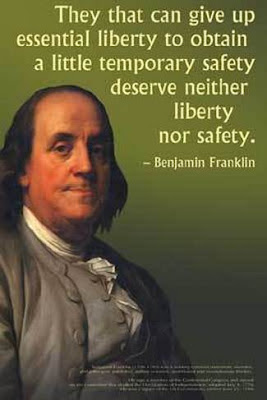 He recently said, as well, that the incoming Obama Administration will appreciate the expansion of executive power that Bush and Cheney worked hard to achieve. He thinks it's important to have a unitary executive power, which is contrary to what our Founding Fathers wanted. The Founders made Congress the stronger power, thus why they were given the power to raise funds, raise/fund a military, the power to declare war, and the power of investigation. They could reject presidential appointments. The idea was that a body of many men representing diverse districts around the country would less likely be corrupt than the single man who holds the presidency. They knew from history and from experience that politicians were tempted by war to increase power, but how lacking foresight and vision could undermine a country by involving the country in an unpopular war.

It's amazing to reflect on how great and visionary our Founding Fathers were...and yet, more than two hundred years later, we end up with imbeciles, morons, and power-mad crazies to lead our nation in the first decade of this century and millennium.

I don't care if Dickless Cheney is reading this post himself. But I have a message for him: You are evil to your core and your false Christianity doesn't fool me or God. You think your wealth and power gives you the license to do anything you want. You think you're doing all this in the nation's best interest. But you're wrong. One day, your cold, mechanical heart is going to stop keeping you alive and you will face the judgement of God and all the people you were responsible for torturing and killing. You will answer to them. The more there are, the worse off you'll be. Karmic payback is a bitch. You can repent all you want but it won't change the last eight years. Your karmic debt is so deep, it'll take many lifetimes to erase the bad karma of your existence as Dick Cheney. You are the worst person to ever be involved in our government and I hope the world pisses on your grave after you're gone.

You are the poster boy for the following Bible quote: "What does it profit a man to gain the whole world but lose his soul?"

I hope it was worth it. You made the world a worse place and there's a price to pay for that. You might fool your fellow "Christians", but you don't fool the one being that knows all. Your deceit will be exposed for the world to see just how evil you are. 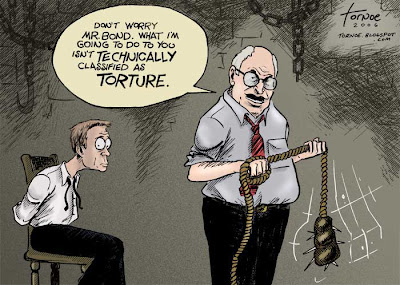