"Milk" Does the Body Politic Good! Thursday night, I decided to see Milk because, hey...I LOVE LOVE LOVE bio-pics! Especially political ones. I didn't know much about Harvey Milk because it was way before my era (I "came into true political awareness" in 1989) and he came across as a "niche candidate" that didn't really have any bearing on my life. Most of the little I've heard of him stems from reading for years about Oliver Stone's interest in bringing a film version of his life to the silver screen. Like his proposed Noriega film project which went nowhere and his Evita project that fell to other people. Harvey Milk was a businessman who organized the gay community of San Francisco and is credited as the person who turned the Castro District into a haven for homosexuals leaving behind small-town prejudices for a larger community of like minded/orientated individuals. It explains why he was referred to as "the Mayor of Castro Street", which was supposed to be the title of the Oliver Stone film. I thought he was a Mayor, not a City Supervisor. Shows how much I know.

I was shocked by how good the film is (though there were a few scenes I could've done without). I'm not a fan of Gus Van Sant films, though he is Portland's most famous resident. I liked Good Will Hunting, loved Finding Forrester but hated Elephant (his interpretation of the Columbine High School massacre). I haven't seen his other works because none of them sounded very interesting. So, I didn't know how I would like this one. While I generally love bio-pics, there's one in recent memory that I did not like: Pollack, about artist Jackson Pollack. 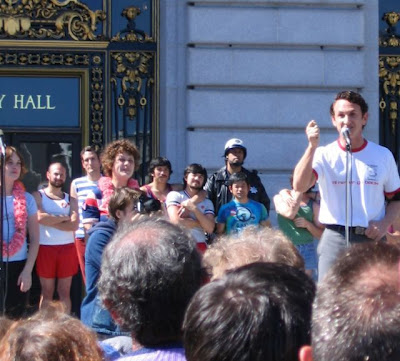 A very good review, Nicholas, and I appreciate your personal reflections.