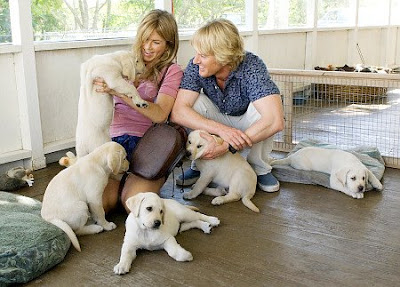 On Friday, I went to see Marley and Me with Christine. I finished reading the book by John Grogan a couple weeks ago, so I couldn't wait to see this film, though I expected it to be a kind of fluffy, popular fare (the kind of popcorn movie that critics pan and award shows ignore). Boy, was I in for a surprise.

I'll state right off that I'm not a fan of Owen Wilson. He plays the same doofus in every movie, so his range is very limited. I would've preferred a more likeable actor like Greg Kinnear in this movie. Jennifer Aniston is an okay choice, though. However, every time I see her, I always think of Rachel...a role I don't think she'll ever be able to escape. She's a sitcom actress who can do well in romantic comedies and other fluffy fare.

The true star of the film, though, is the labrador retriever (at various ages). From puppydom through old age, the parade of labradors provides the backdrop for this movie: the life of a married couple through the process of adulthood: honeymoon, career, home, children, and career change. Through it all, Marley provides the laughs and adventure. The movie is incredibly loyal to the book. I didn't think they would feature the trip to Ireland, the stabbing of a neighbour, and the move to Pennsylvania, but it's all there. Some details were changed, which is understandable...but many of the scenes in the book are all on film, including the hilarious one when Marley jumps out of the car window while John holds onto his hind legs as they navigate through traffic.

Some of the supporting characters were notable: Alan Arkin as John's boss at the newspaper. He comes across as a man without a sense of humour, who claims to be laughing his ass off when he really isn't.

Kathleen Turner was a shocking surprise. She has not aged well at all! What the hell happened to the fine actress of Romancing the Stone and Jewel of the Nile? I barely recognized her. She plays the doggie obedience school instructor.

Eric Dane plays Grogan's colleague and friend at the newspaper, Sebastian. I don't know why he's in the movie other than to provide a contrast to Grogan's family man. Dane plays a single guy who has no problem with the ladies (he is, after all, known as "McSteamy" on Grey's Anatomy). He's not above using dogs and babies to charm women who pass by. His character seems to be modeled after writer Sebastian Junger, as he jets off to exciting and dangerous locations like Colombia to interview Pablo Escobar. His whole point in the movie seems to be an acknowledgement that, yeah...single men might have great freedom and the excitement to go to dangerous places on dream job assignments, but it's also an empty life of searching for one temporary relationship after another. Grogan's life is more stable, with the textbook marriage/career/kids that we're all expected by society to have.

I was surprised by the depth to the movie. It's not just fluffy comedy, but an actual drama of a family's growth and changes, with the choices one makes that leads to angst at midlife when some kind of change is sought. If the film has any flaws, though, I would have liked to see even more Marley. If he were an actor, he would only be considered a supporting role when he's actually the star of the movie...the reason people would want to see this movie.

Like Labrador Retrievers, though, this movie is incredibly likeable and loyal (to the book it's based on). It's the perfect movie to be released on a day like Christmas. It won't get nominated for the major awards, but it's the kind of film that families will enjoy seeing. 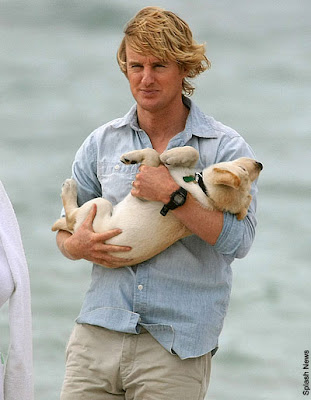 Thanks for the review. We don't attend movies anymore as Bob is not able to make out the dialog with his hearing problems. But we do occasionally rent a video. Now, though, he even has problems making out the dialog with them. He will sit through them for me though.

I may rent it when it comes out on video. It sounds like an entertaining film. There nothing that aggravates me more then to rent a video or attend a movie that is intended to scare you or horrify you.

I watch movies or videos to be entertained. If I want to be horrified, I'll just stay at home. I don't enjoy explicit sex films either. Some things are better just insinuated.