I Always Knew Listening to Barney was Torture! 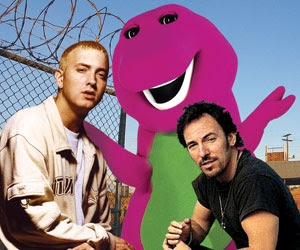 When I was in the Navy, in my last year in La Maddalena, Sardinia, my command reassigned me to work at the Palau Community Center, which turned out to be one of the worst places I've ever worked (it held that record until the past year, when my current job has surpassed it). The reason why I hated it was because I had joined the Navy to be a sailor on a ship. Never in my wildest dreams did I ever expect that I would be assigned a job where I basically had to babysit Navy brats, lonely dependent wives, and off-duty sailors who wanted to drink a lot of beer, eat junk food, and watch horribly bad videos.

People thought I was lucky to land such a job, which is probably why I got it and not them. I was in a great job (which still holds the record for best place I've ever worked...if I don't count my White House internship), working among Chiefs and Officers in Submarine Squadron 22. I truly loved that job, but I knew it wouldn't last forever. I was assigned to ship's company and they could pull me at any time. My last year in Italy, they certainly did. It was a horrible bit of news to go from the best job in La Maddalena to one of the worst (there was actually one place that was much worse, though).

Because of this job, I missed out on a ship's cruise to Israel and Turkey...two countries I never got to see but wanted to. However, I did get leave approved to see South Africa, which I probably would not have seen had I been with Submarine Squadron 22. It all worked out.

Anyhow, there was one young lady I remember well (except her name). She was 17 or so and not even married. She had followed her young enlisted boyfriend to Italy (against her parents wishes). She hung out at the Palau Community Center every day and had a strange craving for dill pickles. She was flirty with me, but dumb as a rock so I wasn't attracted to her. She said she ate pickles hoping to become pregnant. She actually believed that eating pickles helped women get pregnant and she desperately wanted a baby so her boyfriend would marry her...or at the very least, get some child support money. She was the kind of girl you'd expect to find in a trailer park in Kentucky. What I remember most about her is that she LOVED (and I mean LOVED) Barney...that purple monstrosity of a dinosaur who sings the horrid song "I Love You, You Love Me!" She would request that I play a Barney video for her everyday, so I had to hear his goofy way of speaking and that awful song.

This past week, I read an interesting article in which OUR government actually used songs from Sesame Street to "torture" prisoners in Guantanamo Bay. The creator of the Barney theme song, Bob Singleton, wrote in a newspaper column that: "It's absolutely ridiculous. A song that was designed to make little children feel safe and loved was somehow going to threaten the mental state of adults and drive them to the emotional breaking point?"

I totally agree. That's exactly the "cruel and unusual punishment" forbidden by our Constitution. I wouldn't wish a Barney song on my worst enemy. It truly is enough to drive anyone mad.

Maybe we should lock Bush in a room with Barney singing that song over and over like a broken record until he becomes a blubbering idiot crawling in the fetal position with his thumb in his mouth.

It takes a pretty sick mind to think up torture techniques to drive people to madness. Usually, our government prefers loud, heavy metal music. No Enya to put prisoners in a higher frame of mind...but Metallica, Nine Inch Nails, AC/DC, Pantera, Rage Against the Machine, and even Queen ("We Will Rock You!") and Eminem ("The Real Slim Shady"). Plenty have lost their minds, which I believe is a sin so grievious that I fear for the karmic debt of the soldiers who subject their prisoners to music toture. Their souls are truly going to regret that they ever treated another human being so poorly. It's not a moment to be proud of in anyone's life.

According to the article I read, an FBI memo quotes an interrogator at Guantanamo Bay bragging that he only needed four days to "break" a prisoner by alternating between 16 hours of loud music and lights with four hours of silence and darkness.

One prisoner who was subjected to the music torture and released without charge has filed a lawsuit. He described the experience: "It sort of removes you from you. You can no longer formulate your own thoughts when you're in an environment like that." He said that the tactic has made innocent men go mad. 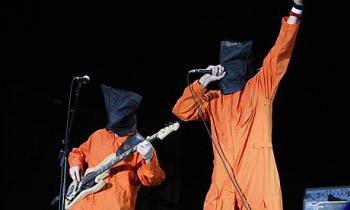 The picture above is of the leftist group Rage Against the Machine, who object to the use of their music to torture prisoners. Tom Morello of the group suggested at a recent concert in San Francisco that they throw Bush into a small cell in Guantanamo Bay and blast some of their music.

I think it's disturbing that our government does such a thing, which I consider to be a form of evil. Since I believe that our whole role on this planet is to bring about a spiritual awareness, I don't believe angry rock music achieves this goal. I've never been a fan of hard rock/heavy metal groups. Van Halen, Def Leppard, and some Guns 'n' Roses songs are about as hard rock as I get. Recent reports about white supremacist groups also featured their fondness for "angry rock music" that is little more than yelling and screaming. That's not music. That's torture, plain and simple.
No purpose is served by torturing prisoners this way. I understand that our government is trying to scare, disorient, and demoralize prisoners to the breaking point to where they confess, but it still doesn't make it right. Whether these people are terrorists or not, they still deserve just treatment. They are humans, too. One man's terrorist is another man's freedom fighter. Our government had no problem with the mujahadeen in the 1980s...but now they are a threat to national security?
Still don't believe it's wrong? The Golden Rule (and karma) spells it out quite clearly. Do unto others as you would have them do unto you. Would the American people be outraged if an American soldier in Iraq or Afghanistan was captured, tortured, humiliated, and made to listen to Arab music at full blast for hours on end? I'm sure Americans would be outraged. So why's it so hard to understand? The law of karma guarantees that you will experience exactly the kind of treatment you give other people. There's no way around it. And even more, Jesus warned people that the way you treat the least of your breathren, you treat him.
So, Christians who participate in the torture of prisoners (even if they find it funny to play the Barney theme song on a never-ending loop at full volume for hours on end), I fear for your salvation. You will absolutely hate your life review because you will experience exactly the same that you inflicted on other people. That's not the way to go about creating a more spiritual world. All you do is foster hate in other people and guarantee that we'll have to deal with these people for decades...when kind treatment might win over their hearts in the long run.
Posted by Sansego at 12:02 AM

All I know is that if you put me in a small room and piped in that friggin Barney song for 24/7, I'd go out of my mind too.