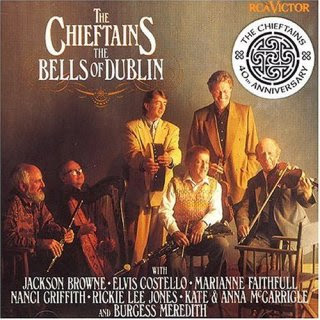 For this week's Flashback Friday, I've decided to write on my favourite Christmas music CD of all time: The Bells of Dublin by the Chieftains. I first discovered it in 1992 when I saw a cassette being sold in the ship's store on the USS Orion. I had never heard of the Chieftains, but I was looking for Christmas music and there wasn't much of a selection. Since my huge Johnny Clegg and Savuka craze began in 1990, I've become somewhat of a musical adventurer where I am always on the hunt for a cool new song I had never heard before. I'm all about taking my ears on a fantastic voyage in sounds. My latest fascination is bossa nova, so if you know of any great bossa nova CDs, please recommend them to me!

Anyhow, I remember looking at the songlist on the back of the cassette and thinking the album sounded intriguing. Part of my family heritage traces back to Ireland (through the last name) so how could I go wrong with a Celtic flavoured Christmas album?

Talk about being blown away. The entire album was simply amazing. It had the awesome effect of transporting me mentally to the medieval ages and I could almost envision what celebrations must have been like back in those days. The sound is incredible and the songs incredibly diverse. Several singers were featured on this album (including Jackson Browne for my favourite of the songs: "The Rebel Jesus") and songs were sung in English or Gaelic or French ("Il est ne" or "He is born" in English). Just try not to sing along to "The Boar's Head" or sitting still to "The Wren! The Wren!" medley! In fact, every time I listen to this album during the holiday season, I visually imagine people gathered at parties, dancing together like they often did during holiday celebrations in the age before television. I would love to experience something like that...a true Christmas party of merriment, good food, and dancing to medieval style music.

I wrote a few weeks ago about "The Rebel Jesus" for the first Music Video Monday of the holiday season, so I don't have too much more to add. Basically, the song describes perfectly the image of Jesus I have often had...which is not the judgmental and exclusive moralist that fundamentalist Christians like to portray, but a man who was a true rebel to the establishment class of politicians and religious figures who prefer to maintain the economic status quo than to give true spiritual guidance. I would love to play this song in church during a worship service, but I'm not sure how well it might go over with some people. On the other hand, if we don't disturb people's comfort zone in church, then what's all this Jesus talk about anyway? It's not about being safe and social, conforming sheep that we are. It's about forcing people to be honest about what they believe and why, and holding them accountable for their beliefs. The basic message of Jesus is: where belief and action contradict, ignore the belief and believe the action. In other words...a preacher who rails against adultery or homosexuality on the pulpit (cough, cough, Ted Haggart, cough, cough), yet engages in it in private...um, what are followers to believe?

My favourite Christmas carol has to be "O Come, All Ye Faithful" or the Latin version, "Adeste Fideles." To me, it epitomizes tradition and class. It has a great tune and simple lyrics. I'm pleased that this album ends on such a great classic carol. And yes, after taunting listeners with the promise, the Chieftains actually do deliver as you hear the bells of Dublin at the very end. Out of all the albums I've heard over the years, this one is hard to beat...from the diverse mix of songs in terms of melodies and languages to the arrangement of the songs, it's simply a perfect album from first note to the very last. If you want to experience a great Christmas musical journey into a medieval period, when celebrations such as winter solstice / Christmas seemed to be truly full of merriment (an era free of commercialism), this album is a must-own. Oh, how I long for a medieval Christmas party someday. Complete with Celtic style dancing and medieval costumes. And most important of all: no television!
Posted by Sansego at 12:02 AM