Faking Remorse On the Way Out 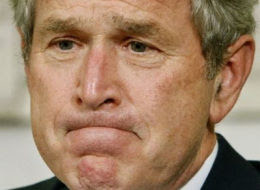 Last week, Bush was interviewed by Charles Gibson of World News Tonight, in which he actually admitted: "I think I was unprepared for war. In other words, I didn't campaign and say, 'please vote for me, I'll be able to handle an attack.' In other words, I didn't anticipate war. Presidents--one of the things about the modern presidency is that the unexpected will happen."

In 1999, he told the first ghostwriter of his campaign "auto"biography (A Charge to Keep) that if he's the president, he wouldn't hesitate to finish the job in Iraq, and unlike his father, he wouldn't squander his political capital. He wanted to be a "war president" because presidents during a major crisis have a better chance of placing higher in the historical rankings. He also campaigned that he never wanted to be president. And third point...Iraq was a war of CHOICE, not necessity. He chose to go to war, so if he was unprepared, he should have left it alone.

He also expressed remorse over the financial crisis.

Interesting enough, he also gave his opinion about the recent election. He told Gibson: "I think it was a repudiation of Republicans. And I'm sure some people voted for Barack Obama because of me."

Wow...what does that say about him? He's actually aware of what a colossal fuck-up he is? I guess if your entire life is filled with one failure after another, one bankrupt company after another, you wouldn't be surprised that your presidency is also an abject failure.

In his attempt to "build a legacy", his sister interviewed him in which he said: "I'd like to be a president [known] as somebody who liberated 50 million people and helped achieve peace."

If killing them means liberating them, why not? And my favourite quote about the Republican view of peace goes something like this: "waging war for peace is like fucking for chastity."

He also said: "I would like to be a person remembered as a person who, first and foremost, did not sell his soul in order to accomodate the political process."

Excuse me?!? Sell his soul? His entire presidency was a never ending campaign against the American people, against truth, against the political process as our Founding Fathers established. He created the most tyrannical presidency in our nation's history. The question is, how much did Wall Street buy him out for? Don't forget, he was the guy who appointed several Enron execs in his administration. It's no surprise that Enron imploded early in his administration as a foreshadowing of how is presidency would end. The crisis on Wall Street came to fruition during the last 100 days of his presidency. Brilliant!

Can you stand another Bush quote? "I came to Washington with a set of values and I'm leaving with the same set of values. And I darn sure wasn't going to sacrifice those values; that I was a president that had to make tough choices and was willing to make them."

Values? He promised to "restore honour and integrity to the White House" but ran the most divisive presidency ever. His values was to character assassinate anyone who disagreed with his ideological policies, even if they happen to be a CIA agent working to secure nuclear materials from falling into the hands of terrorists and rogue states. He had no values but pure ideology of empire, tyranny, and vengeance.

Here's another gem: "I surrounded myself with good people. I carefully considered the advice of smart, capable people and made tough decisions."

Oh...like Donald Rumsfeld, the most hated Secretary of Defense? Or Dick Cheney, the most evil man to ever work in our government? Or how about "Heckuva job Brownie" who let New Orleans drown? Or Chertoff, who denied that people were stranded at the New Orleans Convention Center when the news reported just that? Or Gonzalez, who signed off on torture? He appointed so many unqualified cronies to many positions (such as a 23 year old college grad to start up the Baghdad stock exchange, despite having NO experience on Wall Street) that I don't think he has a clue how incompetent his administration truly was. He preferred staff that drank the same Kool-Aid and only knew how to say "yes!" to everything he proposed. He valued blind loyalty over competence, and it shows.

What is his greatest achievement? He claims, "I think the No Child Left Behind Act is one of the significant achievements of my administration..."

Yeah...teaching children the tricks of how to take multiple choice based testing to boost test score averages only produces a generation that knows how to play "Who Wants to be a Millionnaire?" and Trivial Pursuit, but not a generation that knows how to think critically or make connections between various facts and apply them to life. No Child Left Behind was designed to dumb down American education so people will "do as they are told" and not think about the reasonings why or come up with different solutions.

Even more outrageous, Bush said: "I've been in the Bible every day since I've been the president, and I have been affected by peoples' prayers a lot. I have found that faith is comforting, faith is strengthening, faith has been important."

Been in the Bible? He's that arrogant, that he thinks he's in the Bible?!? Okay, so he means that he reads his Bible everyday...but even I am skeptical about that.

"I would advise politicians, however, to be careful about faith in the public arena. In other words, politicians should not be judgmental people based upon their faith. They should recognize--as least I have recognized I am a lowly sinner seeking redemption, and therefore have been very careful about saying [accept] my faith or you're bad. In other words, if you don't accept what I believe, you're a bad person. And the greatness of America--it really is--is that you can worship or not worship and be equally American. And it doesn't matter how you choose to worship; you're equally American."

This from the guy who said: "you're either with us or against us." This from the most evangelical president who passed judgment on a number of people (the 150 people he executed as governor; the decision to invade Iraq; the unlawful detention of Muslims rounded up and sent to Guantanamo Bay who still haven't been charged with a crime; the numbers of people tortured in his GWOT).

All of this reflection is disgusting. It's obvious that he's very worried about his "legacy", which is a laugh. He should've worried about his legacy in the days after the 2000 election when he ran to his daddy's Court to get the Federal government to intervene in a state's right to determine their election dispute. Then after becoming president, he ignored the fact that more people voted for his opponent than him, so instead of running a goverment of national unity, he decided to run a presidency exclusively for his base of ultra-conservative supporters.

When his presidency went to shit after a perfect storm of incompetence, natural disaster, greed, and ongoing chaos in the Middle East...because he essentially spit on the faces of everyone who voted for his opponents in 2000 and 2004, his support dwindled to the most blindly loyal group of all: the people who get all their news from the Fox Propaganda Channel and its purveyors of hate: Limbaugh, Hannity, Coulter, O'Reilly, and Malkin.

They are hoping history will redeem his presidency. Even if Iraq does become a stable, functioning Democracy, I don't think it's enough to vindicate him and keep him from the bottom of the list of presidents. Presidents need to be judged by the totality of his administration, and historians simply can't ignore all the corruption, incompetence, greed, and illegal actions of his entire eight years. Plus, he came into office a fraud and that counts for something.

In similar news...I was amused to see O.J. Simpson arguing with the judge at his sentencing last week. He was actually hysterical and in tears as he tried to explain that all he wanted to do was get his property back. It was an image of a man where justice has finally caught up to him. He has become a blubbering idiot! Yes, I agree that the sentencing of 5 to 33 years in prison was a bit harsh for an armed robbery of this nature. I have to believe that this type of punishment represents the sentencing he should've gotten in his murder trial. If he serves 33 years, he'll most likely die in prison. A part of me still thinks Fred Goldman was behind the setup to get O.J. Simpson once and for all...and it was brilliant! If there is true justice, I think O.J. Simpson should share the same cell with George W. Bush. They can both commisserate together about how they were set up for failure and it's not their fault!!! It's the damn liberal media.

I got news for you...Good Riddance to both! America is flushing both of you worthless pieces of shit down the toilet into the cess pool where you belong. The Toxic Texan and the Juice, cellmates for eternity. 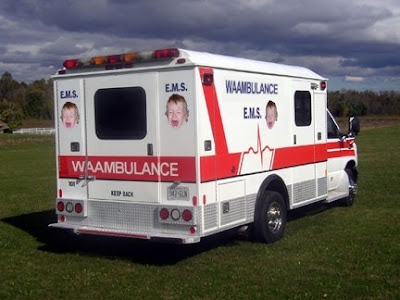 Uh-oh...it's the WAAAAAH-mbulance to come haul away Crybabies Dubya and the Juice!