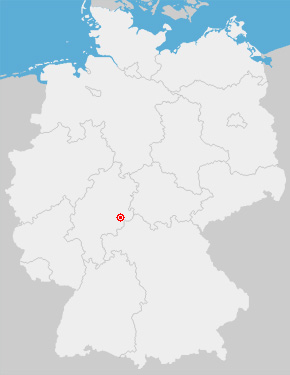 I have to say how amazed I am...not only with the timing, but as an example of how my thoughts manifest themselves in reality. Okay, so I had a bad day at work on Tuesday. Wednesday was a lot more calm. Friday is the staff Christmas luncheon, so we'll have food and merriment and possible good will. In the meantime, I was just struck by my old friend's sense of timing. Tuesday was a really bad day at work, but at the end of the day, I had no less than five requests from old classmates on Facebook requesting me to log on, set up a page, and add them as friends. FIVE in one day! Five people I hadn't thought a whole lot of since I left Fulda, West Germany in 1988. Well, at least not those who didn't keep in touch.

In case you're wondering, the map of unified Germany above has a red dot where the town of Fulda is located. When I lived there from 1985-1988, it was just 12 miles from the East German border. The location was central to NATO's mission. The Fulda Gap is famous for being the most likely point of a Soviet invasion of Europe. My dad was an Air Force meteorologist assigned at the Army base to brief helicopter pilots. He got to play soldier in field exercises. Because of the experience of living among the Army, I have personal experience in all the military branches (Air Force dependent who lived on AF bases in the U.S.; lived on an army base in Germany; served in the Navy; and had friends in the Marines). The Army isn't my favourite of the branches. Yeah, it was cool to see tanks leave for the field and return, but they are loud and leave a lot of damage in their wake, thus why Germans weren't too thrilled with us there tearing up their pretty countryside.

Fulda is a beautiful town of about 40,000 when we lived there. It's not a tourist destination for most people, and Europeans generally know it best as the place where Fulda tires come from (think Michelin or Goodyear). In 1993, when I walked around Prague, I was impressed that some parts reminded me of Fulda. In fact, of all the places I've lived, Fulda slightly edges out La Maddalena, Sardinia. Mostly because it's so clean, I have great memories of being a teenager there, and I truly fell in love with the half-timbered look on buildings. There were so many cool sidestreets, alleys, and places to go. Even now, it's sometimes a blur when I think about what all I saw and where I saw it. 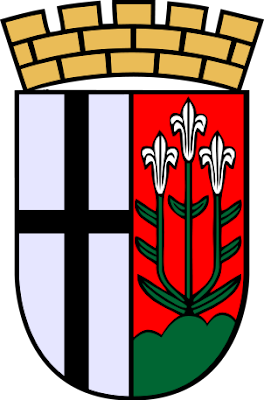 Like every major town in Europe, Fulda has it's own crest symbol, which you see above.

Not to be outdone, but the military has it's own symbol. Downs Barracks in Fulda was home of the 11th Armored Calvary Regiment, otherwise known as the Black Horse Regiment. I loved that symbol. Each time you drove on the base, the guard would salute my dad's car (he was an officer, after all) and say, "Black horse, sir!" 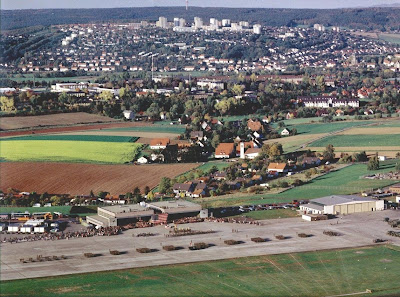 This is an overview shot I found on Google of Sickles Army Airfield (in the foreground). Downs Barracks, where I lived is in the middle part of the photo. In the background, with the high rises is a residential area of Fulda that I thought was downtown (it's not) when we first moved there. Fulda has a traditional downtown, and the "skyscrapers" are apartment buildings, not office space.
No matter where you lived in Fulda, it was just a short walk to countryside. That's why I love small towns in Germany. You can be out in the country in no time and have a great view of the town in the distance.

We moved to Germany in August 1985 and returned to the U.S. in 1988. I attended Fulda American High School from eighth grade through tenth grade. It was a hard adjustment and I truly didn't find my stride until the third and final year, when I had a great group of friends and as is often the case, once I find my stride and a great group of friends, it's time to move again.
In the tenth grade, Mark Diggs was my best friend. I remember thinking it was quite rude when people often asked him "WHAT are you?" No one knew his ethnicity. His father is African American and his mother is Korean. So, he's similar to Tiger Woods that way. Yet, he could pass for Polynesian or even hispanic. We bonded over music. In fact, we often would try to predict which song would hit #1 next. We both liked Debbie Gibson over Tiffany and hated the fact that Tiffany had two number one songs before Debbie Gibson did.
In the Facebook reunion, I was shocked to read that he's conservative and looks like he supported John McCain for president. I thought for sure he would be an Obama supporter! Truly. Shows what I know. Its funny to reconnect with old classmates, because back in the 10th grade, I wasn't really into politics so the subject never came up in conversation. Now, because the bond we share of being American military "brats" overseas, the political differences aren't really an issue. Weird, though, to see how truly different you are from your friends from the high school days. No wonder why most of my friends currently are from my college days and from church.
What has truly amazed me about this whole recent development is that I've had a strong nostalgic impulse for 1988 all year and don't know why. And here it is, culminating in a surprising wave of reconnection with friends I haven't seen since that year. The timing is too convenient to be dismissed as a "mere coincidence." Maybe I should test it further by focusing all my energy and goals on finding a literary agent. If I think about a literary agent every day, maybe I will attract one to my still unpublished novel and won't have to go to Afghanistan or Iraq next year. However, with work draining my energy each day, it is a tough battle to fight. It's easy to reminisce about 1988 when I play music from that year as I work. It's tougher to keep my mind focused on a literary agent while I'm at work. But I will most certainly try.
Nevertheless, the Facebook reunion is a blessing. Truly a wonderful gift from the spirit world to remind me of that great year that was 1988 (it ranks among one of the best years of my life). It's nice to catch up on old friends and see what they are doing with their lives now. 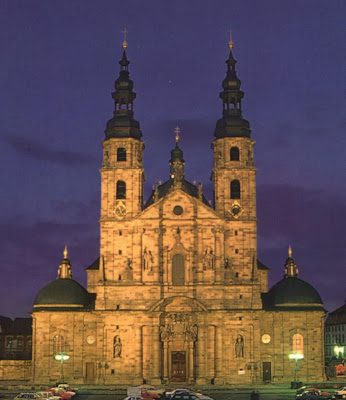 This is the main cathedral in the town of Fulda. Simply called "the Dom." Its the main feature on postcards of the town.
Posted by Sansego at 12:04 AM

What a neat post, Nicholas! It is interesting information about that small German town.

Look for me on Facebook...I could not find you

Yeah...if you ever visit Germany, I'd recommend making a visit there and to stay at the Grune Au gasthaus. It has THE BEST SALAD I've ever eaten. I'm hungry just thinking about it. I don't know what Germans do to their salads, but I absolutely love how it tastes. I can't find a place in the U.S. that compares, not even at a German restaurant.

The town of Fulda might have a population of 70,000 now. It's northeast of Frankfurt (am Main). If I had to live in Germany for the rest of my life, I'd live in Fulda.

Unfortunately though, I'm not a big fan of German culture and language. If I had to be exiled from America and wasn't allowed to live in an English speaking country like Australia, New Zealand, Canada or the U.K., I would live in France. I love French culture, language, the people, and the country. I think my soul is French.

i love facebook. i first joined just to see what it was about, and didn't like it at all. i even closed my account once or twice. but now i really love it--because of just what you're talking about. it has been so fun to get in touch with people from high school and college and all areas of my life. it's fun because you can see how everyone's doing and get a quick sense for what people are up to and feel connected. glad it's been good for you!