All Hair, No Brains 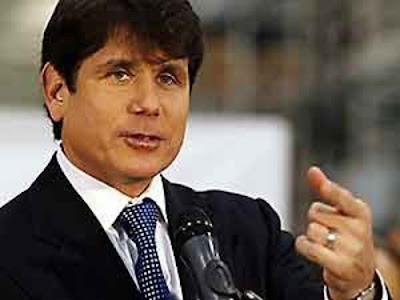 On Tuesday, news hit that Illinois Governor Blagojevich was arrested by Federal agents for attempting to solicit a huge payout in exchange for selecting Senator Obama's replacement to the U.S. Senate. The Feds had wiretapping approval, since he has been under an ongoing investigation for various corruption allegations. And just earlier, he did the Gary Hart thing by daring the media and investigators to go ahead and monitor his phone calls. Dumb, dumb, dumb!

Since I don't live in Illinois, I don't know much of anything about their state government. In the past couple days, as I read articles and listen to pundits on television, the most baffling thing about Governor Blagojevich is that he was bored in the Governor's office and has the lowest public approval ratings ever seen (from between 8% to 18%, depending on which source you read). And yet, he is arrogant enough to still harbour presidential ambitions in 2016! What is wrong with this guy? And what is up with his hair? That's the first thing I noticed about him...because it's so thick. Senator John Kerry of Massachusetts is known for having "the best hair in the Senate" and it makes me wonder if that causes a lot of unnecessary vanity in male politicians. While others are balding or seeing their hair thin out in mid-life, Blagojevich still has a thick head of hair to blow-dry every morning.

The man is delusional. If he seriously thought he could have a chance at the presidency after Obama, he truly is not in the "reality based community." Why? Well...honestly, two reasons: (1) Can you seriously see people electing a politician with such an unsual name? Granted, "Obama" is unusual...but it's fun and easy to say. It especially works well in chanting. It's like a mantra. But Blagojevich? How do you pronounce that?!? Even The Oregonian had to include a pronunciation hint in the front page, over-the-fold headline story. (2) I just don't see America voting back to back presidents from Illinois. Honestly, I think we will have a woman president after Obama, and I've read online chatter about Hillary hoping to use the Secretary of State tenure for a successful launching pad to "break that glass ceiling once and for all." However, she is also from Illinois until she went away to college and married an Arkansas boy.

Patrick Fitzgerald is a great, no-nonsense Federal prosecutor. He was by the book on the Scooter Libby case (though he should've gone after Karl Rove). His press conference regarding Governor Blagojevich was particularly shocking. He said: "The breadth of corruption laid out in these charges is staggering. They allege that Blagojevich put a 'for sale' sign on the naming of a United States senator..." The Governor basically sought a sweet deal, such as being hired to head a non-profit organization and/or have his wife selected to an advisory board in some corporation. Amounts thrown around were in the ballpark of $300,000. Apparently, he's bored of the low-paying governor's job and if he didn't get a quid pro quo deal, he would appoint himself as Senator because it guaranteed that the money would come rolling in, as he became more connected to lobbyists in D.C.'s K Street culture.

The Governor supposedly demanded to be appointed as the Health and Human Services Secretary in the Obama Administration. On tape, he was heard saying of the Obama transition team: "they're not willing to give me anything except appreciation. Fuck them."

Well, okay...if that's his attitude, you know he just killed his future prospects with that statement. If anyone should be blacklisted from government, its him. Impeached and removed from office, prosecuted, indicted, and sentenced to prison. Good riddance!

Of the Senate seat, he actually said that a Senate seat "is a fucking valuable thing, you just don't give it away for nothing." Wow! Where did this guy learn civics and government? One of the powers of being governor is making the appointments to various offices. He's supposed to be a servant of the people of Illinois, using wisdom to appoint the best public servant to the vacated Senate seat (I think Congressman Jesse Jackson, Jr. is a shoo-in).

I know that conservatives are having a field day with this developing scandal. Some are hoping that Obama is connected in some way, and some rightwingnuts are already hoping they'll have enough dirt with which to impeach Obama as soon as he is sworn in as the 44th president. Excuse me, here, but...are they for fucking real?!? After ALL the criminal actions of Bush that these people ignored for the past eight years, they are already talking about impeaching Obama? Man, these are some hateful and delusional people. I just don't see an Obama connection. Especially when Blagojevich is on record dismissing them with the harshest word of all. He's obvioiusly not a fan. He's a colossal jerk. Like former Governor Eliot Spitzer of New York and former Senator John Edwards of North Carolina, the three Democrats who had scandals this year have effectively destroyed their careers and future presidential ambitions.

It makes you wonder what's going on with these men in mid-life. They just self-destruct. Blagojevich, like Spitzer, got careless when he should've known that he's under investigation. And it all boils down to money. Why does Blagojevich need all that money? What does that say to people who make less than $30,000 a year? This greed is outrageous. Blagojevich represents the worst of our out of control capitalist system. He deserves nothing more than making license plates in an orange jumpsuit for 13 cents an hour. Live on that, greedy jerk!

I'm beginning to think that what we're seeing is a complete collapse of our whole economic system. Society needs a restructuring. Housing prices got too outrageously expensive, as well as cost of living across the board. When high salaried CEOs are crying for handouts while going on junkets to luxury spas and resorts for tens of thousands of dollars, when a political party spent over $180,000 to outfit Sarah Palin and her family in Neiman Marcus and Sax Fifth Avenue wardrobe, when Wal-Mart and McDonalds have seen an increase in sales while many other companies have filed for bankruptcy or gone out of business...you know something is seriously wrong with our society.

I saw all of this back in the late 1990s. I didn't understand how wealth disparity could be allowed to grow wider. See...I got my education from a week's vacation in South Africa in 1994, where I saw up close what happens when a society allows extreme wealth to happen to a priviledged few in the midst of massive poverty. What happens? High rates of violent crime, such as armed robbery, murder, and rape. Is that the kind of country our rich folks want America to become? On the flip side, Europe has a much lower crime rate and most people live in the same economic class. Sure, there are a few rich aristocrats, but the vast majority of Europeans are within a reasonable range of affluence, which is actually better than what most Americans have.

I have little sympathy for greed. I want Blagojevich behind bars. But it shouldn't end with him. There's the whole Bush cabal, and corrupt Republicans like DeLay, Armey, and Rove. It's odd to hear conservatives get gleeful about this latest scandal by a Democrat. But here's the difference between liberals and conservatives. Liberals don't defend the indefensible. If a Democratic politician violates the law, liberals will demand a resignation or support impeachment. If a Republican violates the law, conservatives close ranks and defend their own no matter how serious the violation, immoral the act, or severe the crime.

There's one exception, though. If a Republican is caught in a gay sex scandal, they'll shun that person...but for adultery, greed, bribes, violence...they'll turn a blind eye. No wonder why their party is in shambles. When you defend crooks and keep them in office, the American people will vote for the opponent. Thus why I'm glad that Democrats have principles. If a Democratic politician violates the law, he or she should be expelled from the party. We need to keep the upper ground and maintain our integrity. We are the true party of American values.
Posted by Sansego at 12:01 AM