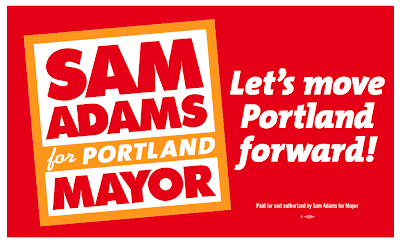 Last night, I attended a forum for all candidates running for Mayor, City Commissioner (three of the four are up for election this year due to the resignation of Commissioner Erik Sten), and Multnomah County Commissioner. There were more candidates on the podium than politically-interested voters to hear them (if you take away the various campaign volunteers, the turn-out was dismally disappointing). I went in support of Sam Adams, but also to see his opponents as well as the various candidates running for the City Commissioner positions. The forum turned out to be three hours long, and I had come straight from work without eating supper. I ended up getting a headache halfway through, so sitting through it turned into a nauseating experience. I don't blame the candidates for that. The organizers could've done a better job.

First, it was poorly advertised. I had only seen it in an ad I happened to come across last week, but I couldn't find the ad again nor found any info online. So...bad publicity led to poor turnout.

Second, they had way too many candidates to ask many questions to. If I organized the forum, I'd run two of them. One for the mayoral candidates, another for the County and City Commissioners. They probably only got to ask between eight and ten questions, with anywhere from ten to fifteen people answering each one. That is just too much information to keep track of.

Third, three hours is way too long for something like this. Two hours tops. 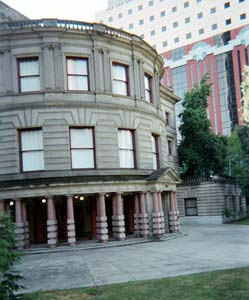 Portland's City Hall
That's not to say that I didn't learn anything. I was interested in the responses. Some candidates were more limelight hoggers than others (particularly Harold C. Williams Two, who's running for one of the City Commissioner positions--though I like his idea to rename NE Portland as "the Diamond District" to market the neighborhood in a way that benefitted NW's trendy Pearl District).
For the mayor's race, there were 9 candidates, including a 21 year old guy who looks like a slacker/skater dude straight out of a Gus Van Sant film. His primary issue is that he hates landlords and wants to abolish the whole landlord/renter relationship by making renters owners. Um, yeah. Good luck with that one! I detect that maybe he has some pressing landlord issues in his recent past.
Another mayoral candidate wants to make Portland into Houston by having the city of Portland absorb all suburbs and make the whole metro area (from Hillsboro in the west to Gresham in the east) Portland. He said that when you first enter the city limits of Houston, Texas, you won't get to the downtown until an hour later! So, what does this accomplish? Supposedly less government to deal with. But we all know about Houston. It's in a competition with Los Angeles to be the most polluted city in America. I say let's not be Houston. That is hardly the model city for Portland to emulate. And my opinion is that Portland needs to be a leader, not an emulater. Portland needs to lead the way in sustainable development, environmental-friendly technology and services, and best quality of life. Chicago is leading the way in the greening of the city, but Portland can easily overtake that.
One mayoral candidate said that she thinks she'll be a great mayor because she raised a daughter on her own and successfully saw her daughter through Portland Public Schools onto a local college for a degree. So, success in parenting supposedly indicates that she'd be equally successful as mayor. That's actually sweet that she thinks that, but...I'm not convinced.
Another mayoral candidate is 26 years old. His views seemed to parrot Sam Adams' views. But what's up with these twentysomethings thinking they have enough experience to run a medium sized city? I'm shocked by the audacity of it. I could see them running for mayor of maybe Troutdale or some small hamlet, but Oregon's largest city? Come on. What I like about Sam Adams is that he has worked himself up to the level of mayor, starting out as a political aide to a Congressman, then helping to elect Democrats to the state legislature, then serving as chief of staff for Mayor Vera Katz in the late 1990s, and finally serving as City Commissioner since 2004. I like how he builds on his experience, showing his talents and competence at each level. The other candidates don't have the proven competence and I suspect ulterior motives in running (like as a fraternity prank for the twentysomethings).
All in all, an interesting (but long) evening that only a true political "junkie" would like. Does that mean I need to attend "Political Junkie Anonymous" now? Oops...I wouldn't be anonymous, though. You all know that I am. One of my best friends (Nathan) once said to me: "You're the only person I know who bases his life on who's running for president." Sad, but true. Only because it was a dream of mine to be a political aide to President Gore. When that didn't happen, I've been struggling to find my life's mission ever since. But man, it's hard to get politics out of my system. Even when I want nothing to do with it (2001-2003 and 2005-2006), I still manage to find my passion for it again. Mark Udall is right. He said that the only cure for presidential ambitions is embalming fluid. I think it also applies to any level of politics.